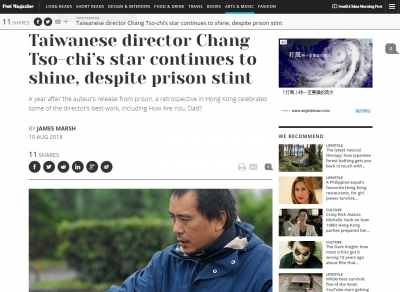 A year after the auteur’s release from prison, a retrospective in Hong Kong celebrates some of the director’s best work, including How Are You, Dad?

Of the second generation of new Taiwanese cinema auteurs, only Chang Tso-chi remains active. In fact, even a recent two-year stint in prison has done little to dampen his enthusiasm for film­making, or the critical plaudits he receives. While behind bars on sexual assault charges, Chang galvanised his fellow inmates into making True Emotion Behind the Wall (2017), which won the best short film award at last year’s Taipei Film Festival.

In Hong Kong, the director is the subject of an upcoming retrospective titled “Stalker in the Dark: The Films of Chang Tso-chi”. Part of Fresh Wave’s Filmmaker in Focus series, the programme will launch on August 17 – one year after Chang was released from prison – and showcases eight features, three short films and a five-episode television miniseries called The Car is Chasing. So far, Thanatos, Drunk (2015) is the only Chang film to have secured a Hong Kong release, making the retrospec­tive a unique opportunity for fans to experi­ence the director’s oeuvre on the big screen.

Chang established himself with Ah Chung (1996), which tells the story of a desperate young man coming of age in a family ravaged by violence. It marked the first time Chang had retained full control of his artistic vision. He followed it up with Darkness and Light (1999), now hailed as a masterpiece of 1990s Taiwanese cinema, and The Best of Times (2002). The latter was named best film at the Golden Horse Film Awards, position­ing Chang firmly on the world stage.

Through 10 short stories, Chang examines the strained relationship between children (of all ages) and their fathers. After a night of partying, a young wannabe gangster returns home, where his son questions his lifestyle choices. An elderly patriarch endures endless fussing by his female relatives while another father, visiting a zoo with his wheel­chair-bound son, begins to hallucinate that the animals have escaped.

By capturing these simple human interactions, Chang’s work speaks volumes about fast-changing perspectives, not just in Taiwan but across the globe.

That this celebration of Chang’s work arrives just a year after his release from prison suggests support from the local film community, or at least acknowledgement that the quality of his movies has eclipsed any personal wrongdoing.

How Are You, Dad? will be screened on August 19 and 27 at Broadway Cinematheque, in Yau Ma Tei, as part of the “Stalker in the Dark: The Films of Chang Tso-chi” programme.